The enemy didn't even attack.

Cool game tho, i love turn based like this.

Hello! I don’t fully understand what’s going on (played and won level 1), would you mind adding some info? (I haven’t played Fire Emblem yet)

Yeah I need to add some proper information sheet, on level selection there's a "?" to the right, or when playing it also shows but it prob doesn't help that much either. The idea i'm testing here is to have other ways of RNG that don't require hit or miss. Long story short each character has an attack dice, when they roll the result is what they hit:

Boot: You remove a boot from the enemy, if the enemy doesn't have a boot this counts as a shield

Shield: You remove a shield; if no shields counts as a Hit 1

Spiral: This is the only miss, but when this happens this unit becomes charged, and its next roll will boost the dice (Miss becomes boot, boot to shield, shield to hit 1, hit 1 to 2 and 2 to 3)

That's the gist of it, instead of having a Hit% as it happens on rpgs, the idea is to have different things that would give you value anyways to make you actually adapt on that. The problem is: Having too much counters to track makes it a lil more complicated, and having so many results on a throw also explodes the calculations, and for number 3, it needs to have a decent AI otherwise the enemy movement is so unpredictable that makes everything also very random.

I've meant to put some of this thoughts on a description but keep forgetting and also, its tiring to organize my thoughts lol, anyways thanks for checking it out! 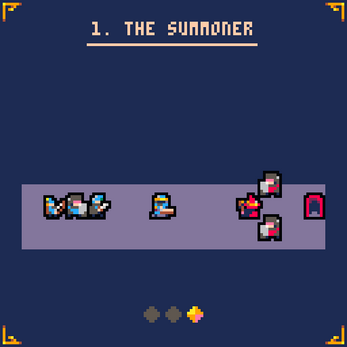