Match tiles of the same color to score points, the board will bring more tiles over time, you lose if the board is filled up! 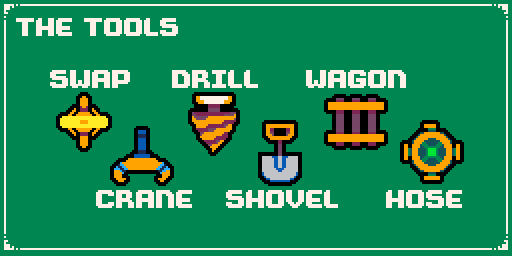 Special tool tiles will give you bonus points, but will also change the game you play so watch out. Each time you match one of these you will play with the next tool in rotation

1. SWAP: Swap two tiles horizontally by pressing O
2. CRANE: Hold O to grab a tile and push it around
3. DRILL: Hold O, then press LEFT or RIGHT to rotate a 2x2 space
4. SHOVEL: Pick a tile and toss it away to a random position
5. WAGON: Hold O to move a 2x2 space horizontally
6. HOSE: Swap tiles positions as you move. Can't be turned off. 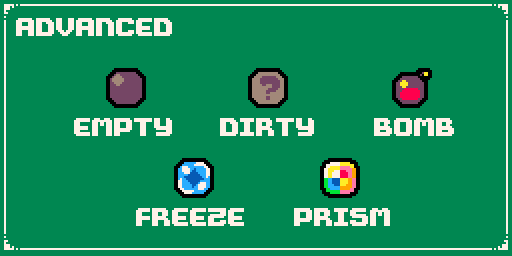 For more specialized work play in Advanced Mode, score is doubled and will give you extra components, but random debris will spawn constantly. Make chains near them to clear or activate them.

EMPTY - Occupies space, falls in big groups
DIRTY - Reveals its color when cleared
BOMB - Tosses a bunch of EMPTY tiles if moved
FREEZE - Time freezes for a while
PRISM - Clears up a big space

Zen Mode: Relax and practice.
The game won't speed up and score will constantly go down to 0.

Styles: Icons or Blobs
You can switch between Colored Blobs or Squared Tiles to play the game with

In order to download this game you must purchase it at or above the minimum price of $5 USD. You will get access to the following files:

I've found an exploit/bug: When using the hose tool, pressing down repeatedly at the bottom of the screen instantly deletes whatever you were holding, and with gravity this means you can clear entire columns. the block seems to wrap around to the top of the board for a frame or two before deletion. It's not incredibly practical since holding down at the bottom also increases the speed of the board, and it nets you no points, but nonetheless it's a thing.

not entirely sure if the comments of the itch page is the best place to report these things, i don't want to clog up the comments with them

is there a discord or something for your games? if there isn't, seems like that could be a good way to organise stuff like bug reports and also build up a community
if there is one i'm just dumb and do not know where to find it

I'm in love with this thing, i think, maybe, but i do have a few notes.
First off, a bug (ha): I've lost a few games seemingly out of nowhere after garbage spawns, possibly because the game thinks that the empty tiles it just dropped are actually a tower reaching to the kill zone. Should probably check that out.
Secondly, the shovel is probably one of the harder tools to use due to rng. As far as I can tell, it likes to launch blocks up to the highest tower it can find, but I haven't exactly figured out what its deal is.
Thirdly, the crane is the tool that I tend to lose on most often, due to too much garbage being piled up for it to be able to pick up anything, and its inability to move anything sideways within the pile.

Overall, a very fun experience. Will probably continue striving for a high score.

Yeah I might have reintroduced that insta lose you mentioned gonna be checking it out. The crane right now has the ability to extra move up to 4 blocks upwards, but I wonder if it should be infinite (I didnt to the sides because it was kinda hard), ive heard similar stuff to the shovel it moves -2, -1, 1 or 2 but I wonder if I have to do something else, i like the randomness a bit

With the crane, it could probably have infinite lift strength and still not be broken. However, game balance is always good to keep in mind. I'm also not entirely sure how a crane would be able to displace sideways without treading on the other tools' abilities.

I think the shovel having an element of RNG is fun, as long as it's somewhat predictable. Maybe a system could be implemented where the shovel will displace to the right if the last horizontal movement you made was right, and left if you moved left?  It could still be random whether it moves 1 or 2, but you would have a way to herd the pebbles a little bit better.
A further thing could be that the vertical movement determines how large the number is, although that would remove the RNG.

one of those games that when i lose, i immediately start again. Really cool twist on the Panel de Pon formula

another banger from calixjumio! very cool idea and graphics

This was great!
It has a learning curve, since there's no tutorial or anything, but being able to pause and scroll down to read was enough for me, great work!

Sorry, but is this game compatible with controller?

It is!, you can try it out in the web version as well, should do the same